35. Vaccination Hesitancy: the Good, the less Good, and the Ugly 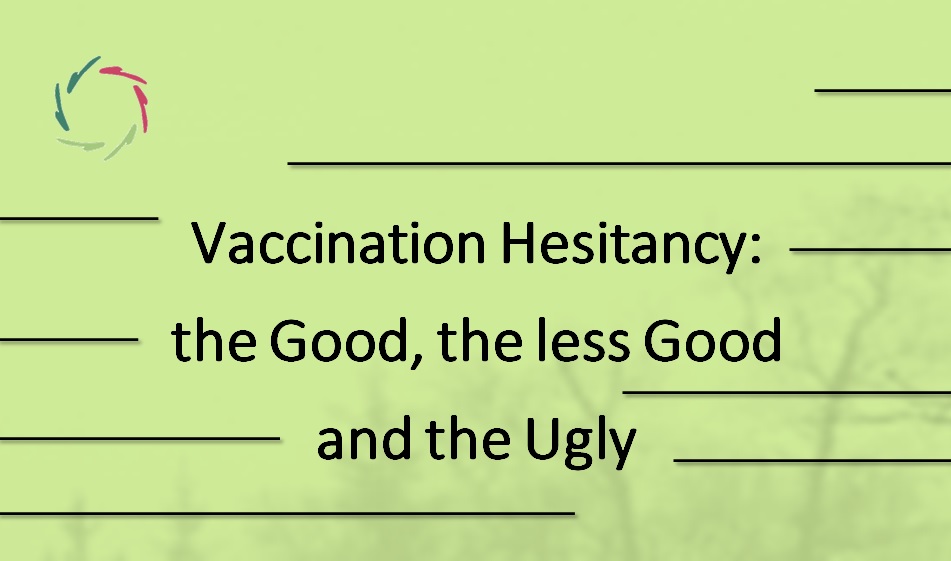 This text is also part of a project at ResearchGate.

Before reading this, you may be interested in how-to diminish vaccination hesitancy: [see: “How to Make Someone Take His Vaccination”]

The world is about to be vaccinated.

Yet, many people report not wanting the vaccine injected into their bodies. ‘Vaccination hesitancy’ is a neutral term to denote the latter. I confess that, presently, I am one of the doubters. My hesitancy comes from uncertainty about safety in the long term and effectiveness regarding personal protection as well as herd immunity.

There is a real danger in getting vaccination if that eventually turns out to be of little use. It may lead to surplus morbidity and mortality. We’ll come to that.

We can discern three groups of people who are not keen to get the vaccine.

The distinction is essential for how to (try to) persuade them to get vaccinated if and when appropriate. Making such a distinction is vital to COVID-vaccinations and other vaccinations, as well as other domains of healthcare.

The three groups are:

These get fueled by irrational distrust, spilling over into what others may see as paranoid thinking and behavior. There’s a role here for self-enhancement, money, status. However, most anti-vaxxers are just anxious people, comparable to phobic individuals. They are not to be blamed.

Generally, in this group, there is little respect for rationality. Thus, these people are seldom susceptible to rational arguments. Demonizing a paranoid person doesn’t cure him. Quite the opposite: It may strengthen his conviction that “others try to demonize me, so I should be extra cautious and resistant.” On the other side, paranoia doesn’t make one unintelligent. Even bright people can be subject to this condition. This way, they can use knowledgeable means to further their cause, attracting followers who additionally heighten the delusion. Not taking this into account would not be intelligent indeed. The situation is real: In the UK, 5.3 million people follow anti-vaxxers accounts on social media, whereas 2.6 million follow the NHS account.

These are non-experts who follow seemingly rational arguments to their logical conclusions, which are clearly wrong to any expert.

These doubters are susceptible to counter-arguments. They put rational arguments in the scale and decide. The solution is straightforward: bring them the correct information.

As even experts can be wrong, and as rational doubt is prominent in any good science, abstractly seen, the last two groups can only be discerned in hindsight. What is right or wrong is to be found in open discussion and communication. The present COVID-vaccinations have a lot to answer for, also regarding their effectiveness. [1][2]

This group is too important to be denied, even though they may dangerously fuel the first group. A correct argumentation may be blown out of proportion. On the other side, fear of being regarded as an anti-vaxxer might make this group hesitant to come out with rational findings.

Active denial to perceive the third group as a possibility can be another kind of paranoia, cynically realized by people who deem themselves to be utterly rational, thus standing ‘above’ doubt in their basic conceptions. In many cases, ‘rational’ stands for ‘conceptual’ and ‘materialistic’ in the sense that no place is reserved for subconceptual processing or the non-conscious mind. In view of all the evidence from present-day science, this is delusional. See the burgeoning literature in neurocognitive science.

In such a case, active denial of the subconceptual leads to pseudo-rationality or even anti-rationality.

Disguised as the crux of rationality, this anti-rational stance puts the whole rational effort in dark daylight. This may harden the first group’s standpoint: If this is what ‘rationality’ amounts to, they don’t want it, preferring to flush away the whole project of rationality. This way, aggression mounts on both sides. Putting more aggression into it heightens that of the other side, endlessly. The result is mental warzone.

In short, an aggressive stance may make anti-vaxxers more deluded and may make rational doubters more hesitant. It is not indicated towards any of the three groups. This includes verbal aggression in emails and social media, where it’s rampant. Open communication is so much better.

Let’s look into the title of this piece now:

We should not promote the vaccines beyond any doubt just because “people would otherwise be more hesitant.” That would be an ill-advised attempt to motivate the masses, actually coming down to manipulation ― guaranteed resulting in much resistance. Only a scientifically open attitude is serious and respectful, thus mandatory. Moreover, if vaccines after some time would not appear to work for > 50%, we would face meanwhile

Let’s go deeper into the last point, shifting a bit from the central subject of this text, but as an example of it. Note the difference between viral shift (one big change) and viral drift (many small changes). Note also that I’m not a virologist. But due to the complexity of immunology and vaccinology, and the situation’s novelty, we should seriously take this into account. For sure, we have never before witnessed the present situation: mass vaccination against a relatively quickly mutating organism. For instance, the scale of vaccination against Influenza is much smaller.

So, if the vaccine works for, say, only 50%, then each time a person gets ill and infective despite vaccination, the virus within that person may have learned to overcome the vaccine-immune shield against it. This more resistant virus may mean a further drift towards a ‘vaccine-resistant strain.’ Through the mass scaling, vaccine-resistance by the virus may build up with special vigor. The consequence is that through the vaccination itself, we boost the virus to mutate beyond it. We attack the enemy, and the enemy defends itself.

The principle: This kind of vaccination engenders mutation and resistance.

This principle may also be relevant to Influenza vaccinations. Drifting viruses jump all over the connected world onboard humans in airplanes. Viral resistance may build up in developed, vaccinated areas, then incubate further in underdeveloped, underfed, non-vaccinated areas. After a while, we see that “a new resistant strain comes from the East this year.” But mutation and incubation do not need to happen at the same spot. This may also take place with coronaviruses.

The result: Rich people getting vaccinated repeatedly with accommodated vaccines. Before the new vaccines reach poor people, the virus has mainly grown beyond, and the cycle repeats itself in wave after wave. The rich keep themselves vaccinated and relatively safe. Through their self-vaccination, the virus mutates quicker and wreaks havoc with the poor. If this comes to be, I hope it will be managed with Compassion.

A possible scenario with disappointing results of vaccinations

may be met by confounding ‘reasons’ for this:

In such case, the reaction might lie in not doubting the vaccine studies but in striving to reach ‘more of the same’: new developments, new vaccinations, additional money-flow to those companies who are already on the market, and prolongation of immense, unnecessary suffering.

Where is the human mind in all this?

With the present evidence, one can be wrong in both directions, denying what is or promoting what is not. In retrospect, it will be challenging to appreciate the other side. In any case, one should not blame anyone, as long as the intentions are sincere.

However, one way to avoid much suffering is by demanding from the industry the use of treatment assumptions, thus making the blindness of double-blind studies more what it is supposed to be, enhancing the joint scientific effort towards better healthcare and, eventually, people’s health and well-being. [3] [4] [see also: “Double-Blind in the Balance”] 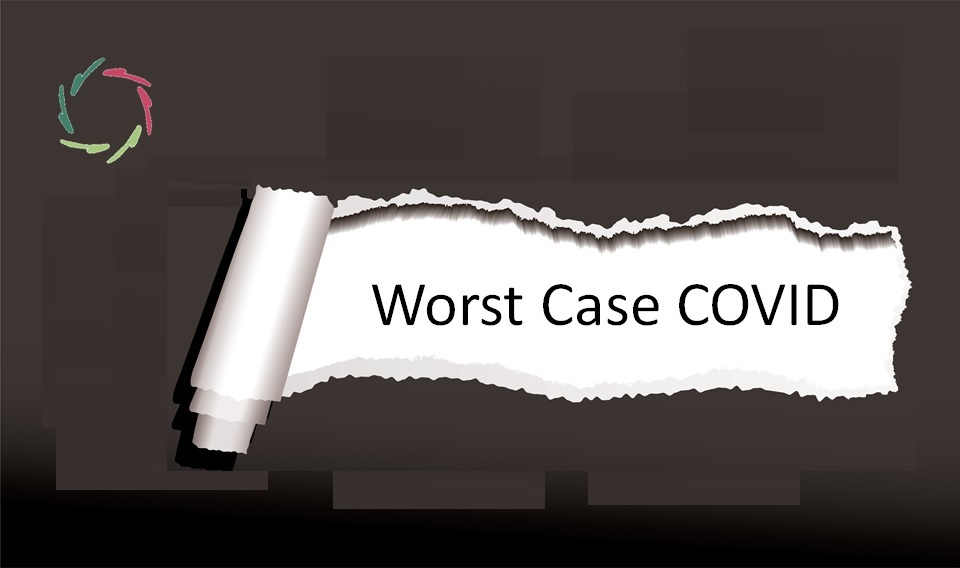 May 2, 2020   Right Is this worst case the future? I would go as far as saying that it is not an impossibility. Please don’t read this text if you are weak at heart. Numbers Vaccination is still far away. Experts talk about at least a year before the population can be vaccinated in Read the full article… 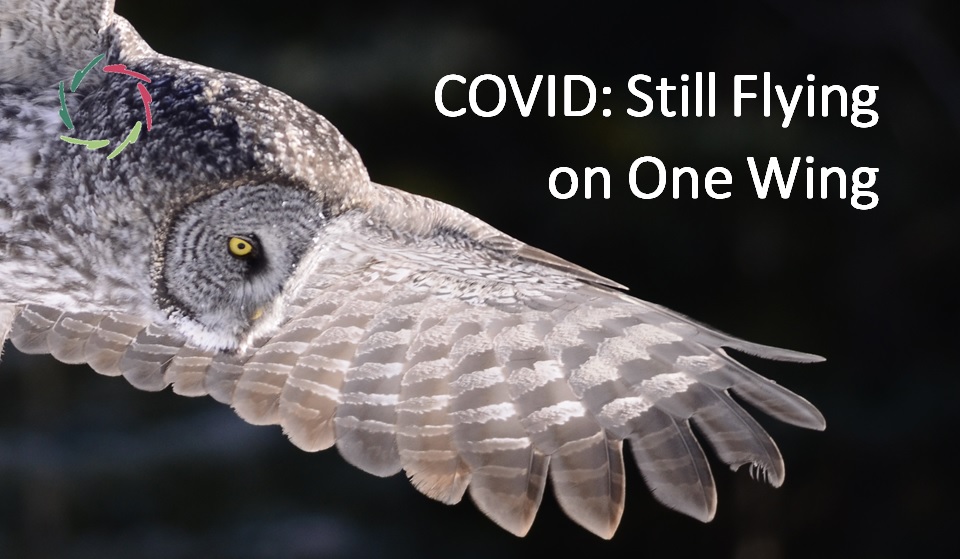 Mad man We’re at the end of October, in full autumn by now. As written (by me) months ago, we’re in full autumn-COVID, which comes before winter-COVID  in Europe and the US. I was going to be (somewhat) angry, and that’s what I am, looking at the curves of worldwide cases and deaths from Worldometer. Read the full article… 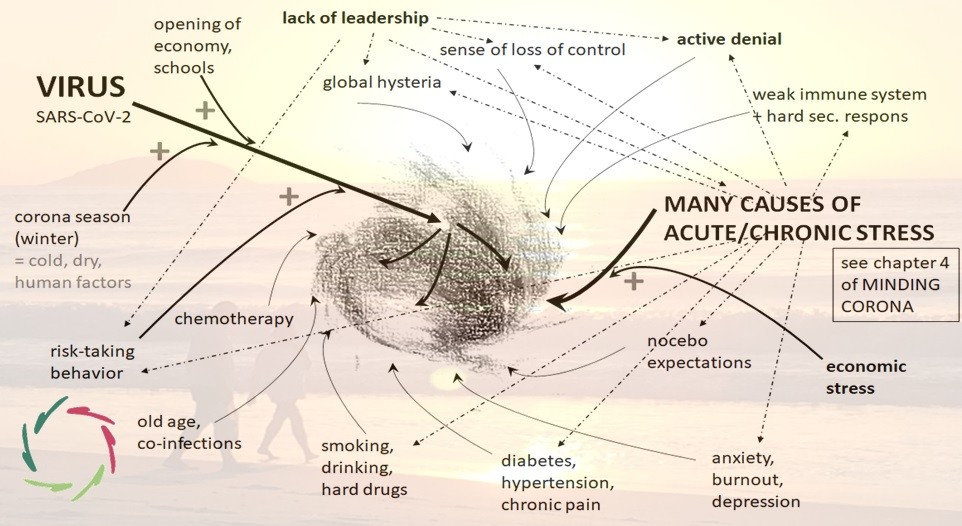 8 COVID-Whirlpool – In Which Virus AND Mind Play Substantial Roles

April 27, 2020   I expand upon an idea about what happens to a person getting more and more COVID symptoms towards a whirlpool that may become fatal. A whirlpool scenario probably happens in many cases of illness. It corresponds with complexity and multi-causal thinking. In crash-course: put many elements together, add more and more Read the full article…