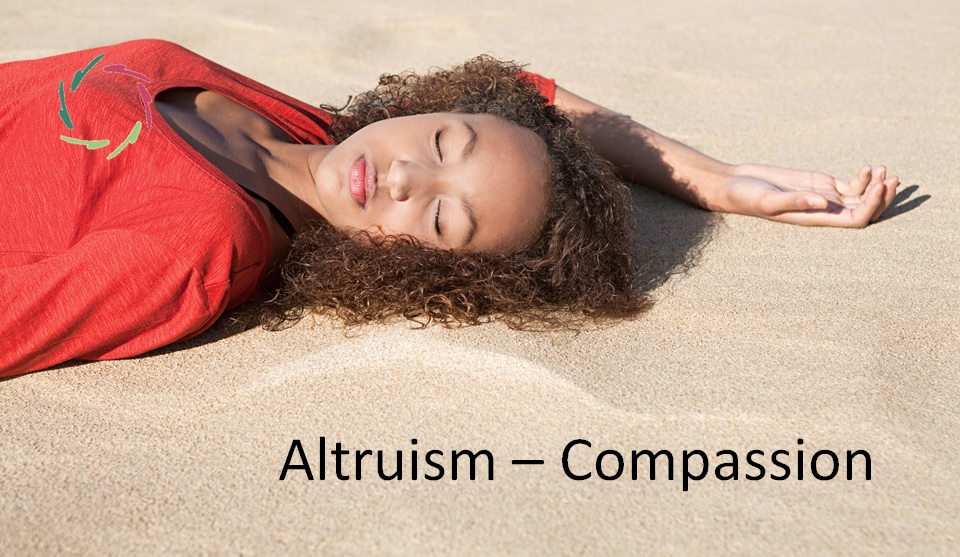 Taking into account the depth of nonconscious, subconceptual processing.

For this text, ’empathy’ may be considered as a part of altruism and Compassion.

The relative sizes of the arrows are arbitrary.

The circle stands for the mental life of a person.

Ego is more or less the consciously conceptual part. This can think it is, on its own, the total self ― thus becoming a mere-ego, dissociated from the rest. [see: “Inner Dissociation is NEVER OK!“]

Egoism, altruism, Compassion: The image gives a conceptual scheme for the sake of this text, conforming to my viewpoint and in the hope of diminishing confusion. NOT meant by Compassion in this is something like pity. That is one reason why I write it with capital C.

Egoism is like looking at the environment as a screen on which a movie plays, starring oneself.

As in the image, Compassion starts with a movement towards inside. [see: “Essence of Compassion“] Therefore, meditation is a good exercise on the path. [see: “Practicing Compassion“] It is like filling an inner bucket until it overflows. The overflowing itself takes little effort.

Since the overflow of Compassion comes from depth, it takes with itself the power of depth towards the outside. I made the arrow bigger.

Altruism may take more effort in going out. In altruism, one may forget the ego, even the total self. Contrary to this, Compassion is more spontaneous. [see: “Importance of Spontaneity“]

In short: Altruism is a doing; Compassion is Art.

Compassion may come with a warm glow inside. Some, therefore, associate it with ego-centeredness, the goal being this warm glow or another personal feel-good. I’m afraid I have to disagree since Compassion does not originate in the ego. The warm glow can be felt from the fire deep inside precisely through transcendance. But indeed, ego can appropriate it; mere-ego can become addicted.

By itself, Compassion is not easier than altruism. The path to the inside may be heroic. Also, the going-out may be so spontaneously powerful as to be particularly demanding on the Compassionate person, also arguably much more compelling than in the case of altruism. Think of the parent who gives her life for the child. I call that Compassion, not altruism.

A bit of Buddhism

The above confusion comes from an incorrect insight into ego vs. total-self. In Buddhist philosophy, a clear distinction is made between the ego and ‘Buddha inside.’ The latter is already present before attaining any form of Enlightenment. You don’t have to look for Buddha in any statue or anywhere else. If you find Buddha in a statue, as a famous Buddhist saying goes, you better destroy the figure because that is an illusion.

‘Killing the Buddha’ is killing the illusion that ‘Buddha-nature’ stands apart from total-self.

Ah, one may love it or not, but the Christian New Testament is a book of poetry. In one story [Luke 10:38-42], Jesus visits Martha and Mary by surprise.

Martha is bent on the doing, being busy with all preparations. Mary sits at Jesus’ feet, wide-eyed, enjoying, bent on her growth. Jesus, in the end, although he appreciates Martha, prefers Mary’s way. Transposing it to our issue, the story shows a preference for Compassion over altruism. Mary, as a bodhisattva of Compassion [see: “Guan-Shi-Yin“], Listens deeply. [see: “Deep Listening“] Mary fills her bucket.

[I’m no Bible-believer, but I don’t think that is relevant to appreciate Jesus’ actions.]

since we’re in the Catholic mood, as a case of altruism.

Mother Theresa, like Martha, wanted to be with Jesus, literally and altruistically. As we posthumously know from her hidden diaries, Jesus didn’t respond, literally, apart from the beginning. This may be one of the most tragic love stories of all time. Still, Mother Theresa did all her well-known good works while privately suffering immensely. As far as I can interpret the story, she listened hard but didn’t Listen deeply to herself.

“If the result is obtained, it doesn’t matter how.”

Ask Mother Theresa. She would have agreed… and also not. To her, it did make quite a difference, personally. So, the world’s suffering (in that of herself) could have been diminished.

With the same end-result from altruism vs. Compassion, one might still say, “OK, no matter where it comes from.” But I don’t think it leads to the same end-result in strength and durability. In my view, the difference may be substantial, even if not apparent at first sight.

PLUS: If you start from the same amount (not possible) of altruism versus Compassion, then the difference in result may be huge. With all her energy and with full Compassion, could Mother Theresa’s arrow have become a giant one? Could she have changed the face of the continent? Could she have prevented the present-day religious-fanatical streak? Maybe.

Of course, Compassion is not only for big issues. It is also important in the little things.

Results matter at all levels.

This is also relevant to modern-day coaching/psychotherapy. [see: “Compassionate Goal of Coaching“] Also, to the way we might look at placebo-strength [see: “How Active is Placebo?“] and how to find an alternative. It concerns healthcare as a whole.

So, would I prefer Mary’s way to Martha’s?

Of course, with all due respect to Martha. She’s wonderful. 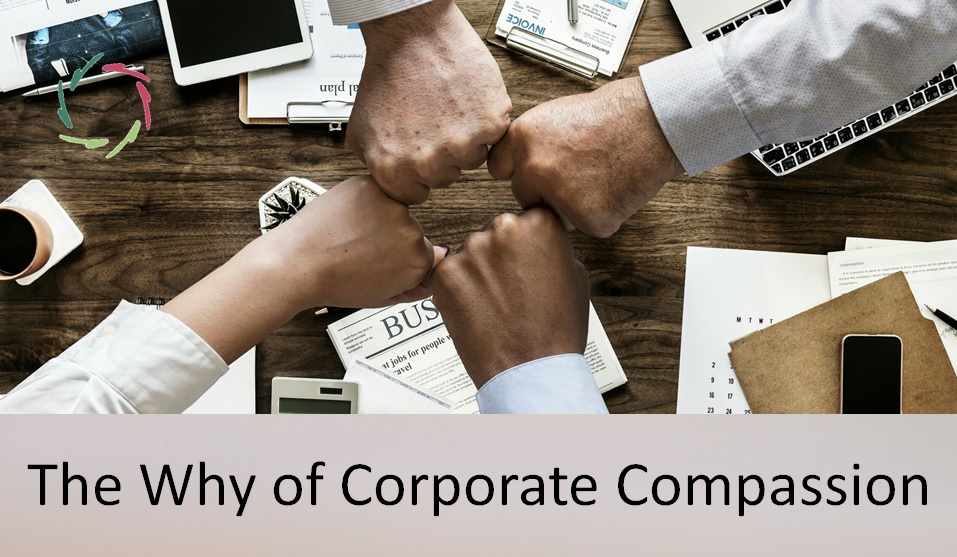 The Why of Corporate Compassion

Corporate Compassion is not about pity, nor softness. Its effects are as rock-solid as a corporate building if you know how to bring it about. [see: “Compassion, basically“] Empathy in the line of Compassion Basically, Compassion goes deeper, taking into account the importance of mental-neuronal processing in any human endeavor. Thus, it is also broader, Read the full article… 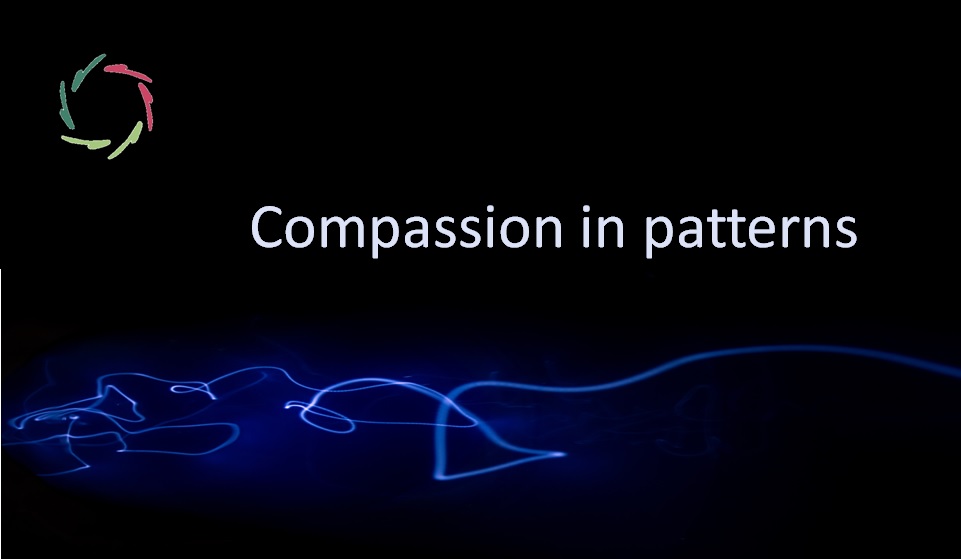